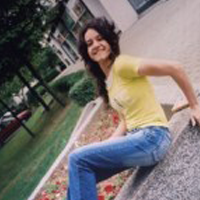 Despite all of her suffering, caused by the cruel Lafora disease, she has a contagious spirit and a shining smile like lightening, that brightens life around her. Her large dark glowing eyes, full of gratitude for everyone nearby, shine great love and tenderness. 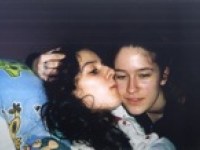 Tatjana was a healthy, good, noble girl. She was an excellent student, and liked to read so much that a new book would make her happier than a new dress. As a little girl she wanted to take ballet lessons, so she did. And later she wanted to dance and was delighted with every performance. She played tennis and skied so well that she was even advised to participate in competitions. She wanted to become a pediatrician someday so she could help other children…

One day, during the second half of her first year in high school, I got a phone call from her school: “Please come, Tatjana is not feeling well.” Surprised, and for a moment lost, I asked myself if I had understood. We were afraid to get a call from Milana’s school because she already had some problems, Tatjana was a healthy child, what cruel destiny was it? Unfortunately, we found out that she also had some kind of clonic seizures. Diagnostic procedures followed – MR and CT of the brain were all right, EEG showed a certain slow motion and changes, which should point to therapy.

Tatjana went back to school activities, but soon a second seizure followed. We left with both girls for a consulting check up to the Neurological Institute for children and youth in Belgrade. Professor Jovic and his associates got suspicious and ordered some gene tests, the diagnosis: MORBUS LAFORA (NHLRC1, EPM2B). DESPAIR, SADNESS, DISBELIEF. There are no neurological diseases in both of our families, but here we are dealing with the cruelest genetic lottery sequence of gene mutations from both parents. Only later, on the Internet we found a commentary of a parent: “OUR CHILDREN ARE SENTENCED TO DEATH, WITHOUT OUR GUILT.”

During these days in Belgrade we were hiding the cruel truth from the two of them, but they felt that there was something awful going on. I remember when Taca, during a walk, suddenly sat on the walkway and started to cry. She showed me a message she received from her schoolmate, a message of shining support and kindness. Her schoolmate wished that Tatjana would come back to school as soon as possible. I will never forget what her friends, during their first visit after we came back to Banjaluka, said: “Mrs. Snjezo, how could this happen to Tatjana, she is the best of all of us.” Only a child can say something like that and be so sincere, warm and noble. Even today, this kindness means a lot to Taca.

Unfortunately, Tatjana was headlong “decaying”, she didn’t reconcile with her destiny, refused food and, despite all efforts, she rapidly lost weight, and her immune system started to fail. During that winter she suddenly lost her favorite aunt who had been a great support to her. As a doctor, I am convinced that this additional stress gave her pneumonia a few days later. Three long months of agony started, a fight for her life, atelectazis, tracheotomy, secondary intra hospital infections… Taca, anyway, managed to win this battle. After leaving hospital, she never got back on her feet again, but has strength in every way, and hope for life returned. Right now unsolvable problems are often and painful colic because of frequent urination of kidney sand and stones.

There are days without pain, days when she’s happy for every move she makes while exercising. But, there are also days when she strongly wants to say something, participate in conversation, but saying even one word is hard, or even impossible. Those are perhaps the hardest moments and those tears hurt the most. Often she complains to her sister while she’s sitting next to her bed trying to read to her or to recount some of their old stories. Milana is often kicking us out of the room and whispering something on Tatjana’s ear. Sometimes, this whisper is loud enough for us to hear: “Come on, sis, give it a try, get out of this bed, do you know how much I miss you?” They teach us what patience and unconditional love are. Many friends have disappeared, phones got quiet, most of the time they are focused on each other. That’s not only our story; unfortunately, this is the destiny of almost every story of this kind. There are many reasons: discomfort, disbelief and fear of disturbance… The truth is that it’s very difficult to be friends with someone who has lost a big part of himself or herself. But, believe us, a great part is still there and it is going to remain there for a long time. You should not judge a book by its covers, you have to gain strength and give it a try… They need friends, relatives, neighbors to fight in this hard battle, but we are not saying this as a criticism, but as an encouragement…

Hope and a will to live have returned to Taca and for sure she has a lot of resources not easy to be destroyed. Every day we are feeding her hope, which she surely needs as much as food itself. This hope is being transferred to her through stories of how Professor Jovic, Professor Minassian, Professor Escueta… are going to make “vitamins” which will strengthen her muscles so she will be able to swim again, all the way to the buoys. These great enthusiasts are working hard and they are convinced to be on the best way to reach a solution.

WITH ANY KIND OF INVOLVEMENT IN OUR FIGHT, YOU ARE HELPING US TO BUY TIME – THE ONLY DISPUTE THING

“We are the Gajic family from Banja Luka in Bosnia and Hercegovina. Our two girls, Tatjana and Milana are suffering from the Lafora disease.”

Read more about the family on their website:Let Us Beat Lafora