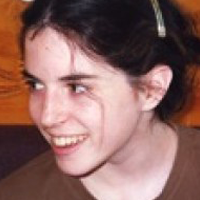 January 6, 2014 – The below text is taken from the Caring Bridge Site for Kristen Rice

We are creating this website to let everyone know about Kristen’s current situation. We feel that she is now almost certainly approaching the end of her life. I almost got this site up and running over a month ago, when she was hospitalized with pneumonia, but that strong body of hers pulled through and I thought we might have more time. However, she now has another pneumonia, and the Hospice team tells us that we can expect hours to days. She is at home, surrounded by more love than our hearts can hold.

This has been a long journey. She has lived with Lafora Disease for 14 years, half of her life, given that her 28th birthday is less than two weeks away. What a good life she’s had, despite the relentless progression of this neurodegenerative disease over the past 14 years. She’s already given and received a lifetime allotment of love (and then some!) She’s remained cheerful and resilient … even joyful through most of the journey, despite her profound physical and mental impairment. And she’s brought immeasurable joy into our lives along with the heartache.

I’ve posted some pictures that were taken on September 22 on San Juan Island, “wheelchair dancing” with Mom and Dad to “My Girl” by the Temptations. How fortunate we were that our dear friend Charlotte, a professional photographer, happened to be there with her camera, and captured these moments for us forever.

That’s the last glimpse we’ve had of her joyful essence. Within a month of those pictures being taken, she became wracked with uncontrollable seizures. She’s exhausted, as we all are, but she’s now resting peacefully.

If you have a memory or two of Kristen you’d like to share here, we’d be most grateful. We’d like to make this time a celebration of her life, and we’d treasure your anecdotes of this beautiful, quirky little poet and philosopher. We promise to read them to her, and I believe she will hear them and they will bring her joy.

Kristen has gone to a place where there are no seizures. She waited for Katie to make it home at about 10:30 last night. Once Katie arrived, her breathing became peaceful. At 7 AM this morning she drew her last breath.

Thank you all for your love and support. We read all of your entries to her as they came in, and they gave us much comfort throughout the long, dark night.

To leave a message of sympathy and support for the Rice family please visit www.caringbridge.org/visit/kristenrice

Kristen was a beautiful, articulate, high-achieving, 14 year old, full of fun and curiosity, when she began to experience occasional uncontrollable jerks, which we came to learn soon after, represented myoclonus.  The early manifestations were subtle, such as accidentally spilling her milk at the dinner table and breaking dishes when she unloaded the dishwasher.  We were seen by a neurologist, who sent her for an EEG and diagnosed Juvenile Myoclonic Epilepsy (JME).    We were told that this is a quite benign type of epilepsy that is readily responsive to antiepileptic medications, usually quite easy to fully control.  So she was started on Depakote, and for a few months, went on with the life of a basically normal eighth grader.  She announced that she wasn’t going to let her epilepsy be a “big deal” in her life, and her greatest concern was that she was no longer allowed to take baths in the tub.  However, we soon began to notice increasing clumsiness, and she began to have difficulty for the first time in her life in honors math.  And rather than getting the myoclonus under control with Depakote, she began to have full tonic-clonic seizures and much difficulty walking as well. This was in the winter/spring of 2000.

That’s when I got on the internet and started learning about all the terrible forms of PME.  I couldn’t let myself believe that it could be any of those horrible things, and our neurologist was still hopeful that it was simply a matter of not being on the right medication.  On the neurologist’s advice, she was admitted to Children’s hospital for a “rapid crossover” of medication, i.e. switching her from depakote to keppra over the course of 3 days rather than the conventional gradual weaning off one medication while slowly increasing the other.  (No one I have ever spoken to has ever heard of this kind of unconventional approach.)  This turned out to be a disastrous plan, landing Kristen in the ICU in a pentobarb-induced coma.  At that point we were told that we may never be able to stop the seizures and that her survival was in eminent jeopardy.  I can tell you that only a parent who has endured this experience, watching their child’s flat-line EEG while the body is being kept alive by a ventilator, can understand that depth of suffering.

The doctors were able to wean Kristen off the pentobarbitol and on to phenobarbitol so that she no longer required a ventilator and could be transferred out of the ICU.  However for 5 weeks after that she never regained consciousness, and we began to make plans to take her home and care for her in a vegetative state.  Then one day she woke up.

She didn’t talk right away, but she smiled and really connected with us through her facial expressions, so we knew she was still there.

Only a parent who has experienced this with their child, can possibly understand the depth of that joy.  After several days she began to say a few words.  She surprised the neurologist who made rounds every day and always held up his pen and other objects for her to name.  When she actually named them one day, he was so excited he started jumping up and down and squealing, with tears streaming down his face.  After he left the room, Kristen said to me drolly, “He’s a real nut.”  Soon she was saying things like: “These pajamas are atrocious”, noticing for the first time the cute frog pajamas I’d dressed her in while she was in her coma.  With physical therapy, she regained the strength to walk with assistance.  Though she had walked in to the hospital on her own, when she left 5 months later, the ataxia was too severe.  She never walked again without assistance.

After that nightmare 5 months in the hospital, where her disease progressed so rapidly (no doubt greatly  accelerated by the unfortunate “drug crossover” attempt), her progression has been very slow.  She was never able to read after leaving the hospital, although, with great effort,  she was able to write the alphabet and tried to write some poetry, which she had loved to do before.  Her speech was very slow, but, with effort, she could produce whole sentences.  She could feed herself with adaptive utensils.  She could dress herself with moderate assistance, although it would take over an hour.  She didn’t know she couldn’t walk without assistance, so during this early period, there were many falls and trips to the emergency room for stitches.  If you turned your back on her for an instant, she’s stand up and over she’d topple.  We had a device under her mattress that alerted us when she started to climb out of bed at night.  There was very little sleep, even in those days.

Now, almost 8 years into this, she is in a tilt-in-space wheelchair because she is no longer able to support her head and trunk, let alone to stand or walk.  She is completely non-verbal, mostly incontinent, and completely dependent on her caregivers for all activities of daily living.  She is no longer able to swallow liquids and rarely exhibits any interest in solid food, although she can still swallow solids. She chokes more and more frequently on her own secretions.  She has a gastrostomy tube through which she receives her medications, fluids, and most of her nutrition.  Without her feeding tube, she would have died many years ago.

Kristen has grown from a teenager into a beautiful young woman, now 5’ll” tall, having finally grown into her long legs, but we’ve never seen her stand on them.  She has a mane of thick dark brown hair, but we’ve never seen her toss it the way beautiful girls do. Whenever I see a beautiful tall young woman walking down the street tossing her hair, I indulge myself in a brief fantasy that it is Kristen.  It does seem like such a waste to me.  But even more than her outer beauty, being robbed of her gifts and talents seems such a shame.  She was so full of potential, a writer, an artist, an environmental and human rights activist.  She was going to change the world.

My husband and I, and her home nurses, and social worker from the palliative care team, are beginning to have conversations about acknowledging that a time may come when we will be faced with a decision whether or not it is in Kristen’s best interest to continue keeping her alive through the gastrostomy tube.  We all agree that we’re not there yet, as she continues to light up the room with her radiant smile and to reach out with her shaky little arms to give the most wonderful hugs in the world.  But those moments are fewer and farther between, the farther we go on this sad journey.  Whenever I contemplate the world without Kristen, I have to go bury my face into her neck and smell her sweet skin.  She lives at home, and always will, and we cherish every moment with her and pray that the end is still a long, long time away.

Let me just end with a tribute to the amazing person Kristen is.  My sense is that she shares many qualities with the other children in this group, leading me to believe that God chooses only the most special and sweet-spirited ones for this type of journey.  Many other parents on the website have expressed the same kind of awe at the strength and grace of these children, who tend to accept their devastating losses without complaint, and to exude joy right up until the end, teaching everyone around them what is and is not truly important in this world.