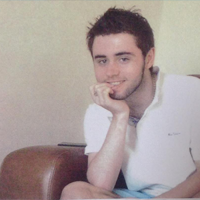 John had a very bad couple of weeks and I desperately tried to keep him at home, especially as it was only about a week before Christmas and I was so looking forward to having a peaceful day with just the two of us. Chris, John’s brother, was going on holiday. In the end the seizures won and there was no choice, John was once again admitted into intensive care where he suffered endless days of seizures. It was relentless and I can honestly say I never thought John would have any respite from this endless nightmare. Thankfully John had one day of peace, which was the day before he passed. He was the most courageous boy I have ever known and throughout his long illness never ever complained of what he was going through. No-one but the parent of a Lafora child could ever truly understand what it is like to live with this horrendous disease that our children are afflicted with.

John’s funeral took place on 17th January 2012 and that date happened to be the anniversary of my Uncle Tom’s passing. This gave our family a lot of comfort. The funeral was really beautiful, which might be a very strange thing to say, but it truly was and John had the best send off ever. There were about 35 members of family that came over from Scotland, England and Ireland. This was a huge support to Chris and I and I will never be able to thank them for being by our side. Also to the dear friends who have stood by us through this whole journey.

The void John has left will never ever be filled. He has left such a legacy through his courage and bravery that the fight must continue until the day comes that the cure for Lafora has been perfected.

A Mother’s heart can never heal
When part of her is gone
It’s those of us who are left behind
For them, life must go on
A song, a smell, a certain noise
Reminds us you are near
Forever in our hearts and souls
My son, forever dear