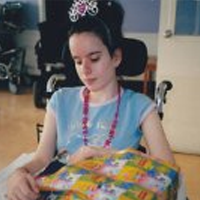 “My beautiful sister Lucy passed away in December of 2009. I cannot express accurately what the passing of my sister has done to our family. To say that it has been devastating would be an understatement. It was devastating enough to get the Lafora diagnosis several years ago, and then to lose her was and still is unbearable.

We are from Toronto, Ontario. My sister passed away just a few weeks shy of what would have been her 24th Birthday. Her battle with Lafora went on for approximately 10 years. Lucy was a super bright energetic teenager and at the age of 14 we knew that something was wrong. Her balance was off, she started dropping things, complained of headaches and her vision and loss of power on her ankles and legs when walking, then the seizures started. We saw a few neurologists and several other medical professionals and everyone diagnosed epilepsy. We knew it was much more than that. Medication was simply not controlling the seizures and trial and error went on for a while until we found a balance. When we were introduced to Dr. Minnassian several years ago it only took about 4-6 weeks to get the diagnosis we were not prepared for.

This disease is monstrous. Within a few short years, my sister’s energetic body became so frail and dependant. I still cannot believe how the disease progressed. My sister towards the end could not walk, said a few words here and there, and had a G-tube, but boy could she ever still smile!!! 🙂 In the end, my sister lost her battle with Lafora because of complications with her G-Tube. After going in to the hospital to have it replaced somewhere along the process her stomach was ruptured. Later on that day, when my sister’s discomfort did not pass with some medication per the radiologist’s order, we brought her back in to the hospital. Within that last hour, we knew something was very wrong. She was slipping away from us. Her vitals were almost non-existent. Things happened so quickly. She was put on life support that night and on the following morning they operated to mend her stomach. We were in shock! They told us she might not make it through the operation. She did though, my sister was a fighter! For a few weeks after that although she was still critical because of all of the infections she got, we never lost hope. When my sister was at her weakest, Lafora kicked in overdrive. Her seizures did not subside. The only way to give her body any sort of rest was to sedate her. She was sedated for long periods of time. It was so heart breaking. We knew we would lose her to Lafora because a cure was not yet had, but not because of her G-tube. I am still having a hard time with this as I type these words. The emotions are so uncontrollable right now. The tears are dropping steadily on my keyboard.

My sister passed away peacefully with us loved ones at her side, so that makes the grieving a bit easier. Throughout her stay at the hospital, Dr. Minassian was always within reach, God bless him. He even came to visit with my mom and sister. We donated my sister’s brain, heart and muscle to help with research as the Gellel family did several years ago with their daughter Diane. We keep telling ourselves now that it is selfish to want my sister alive and back with us, because she was not like you and I, she was ill. Her beautiful smiling face only went so far. She was confined to a wheelchair, ate through a tube, could barely speak and needed a lot of suctioning towards the end of her fight. It hurt like hell to see what she went from being to what the disease did to her over the years. Her beautiful face remained though, and her smile was as radiant as always. God only takes the best. we will never forget this.

To all of you who have lost someone to this disease, we share in your grief immensely. We personally know Sam and Rita Gellel who have lost two of their daughters to Lafora. The level of grief is so difficult to fathom. Keep strong everyone and hold your children and family members a little tighter each time.”

My sister Lucy was diagnosed with Lafora several years ago. Lucy was an energetic teenager and actively involved in martial arts up until the age of 16, when we knew something was very wrong with her. It began with the breaking of dishes and Lucy spilling her drinks. Next, Lucy was always tripping and losing her balance. All of our family doctors told us that nothing was wrong and that this stage would pass. Then, shortly after her 16th Birthday, Lucy fell down the stairs, a result of having a seizure. Shortly after that Lucy was put on a series of medications, all of which were not affectively controlling her seizures. Her neurologist at the time recommended that we pay Dr. Minnassian a visit. A few months afterwards, we were given the terrible news that Lucy had been diagnosed with Lafora.

Several times within the last few years, we thought that we were going to lose Lucy. This disease is absolutely and 100% completely heart breaking. Lucy went from being a very popular and fun loving, energetic girl to being unable to walk, dress herself and feed herself. Lucy now receives her food and medication through a G-tube. Without the G-tube we would have lost Lucy a long time ago. But no matter how frail and tired this disease has made her, Lucy still to this day smiles as bright and as big as she did prior to being diagnosed.

Lafora has devastated our lives, but day in and day out we all strive to infuse as much love and affection as we can into Lucy’s life. And our main priority is to keep Lucy as comfortable and as happy as possible.