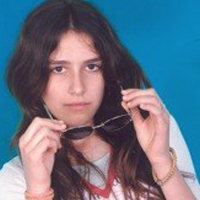 To be and stay a friend, even when it is most difficult, is certainly, successfully passed, big exam in life. 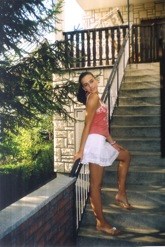 Milana is our younger girl, now 16 years old. She has, unfortunately, also become ill with Lafora disease, with side symptoms appearing even before her older sister. Diagnosis was set only when Tatjana, in full health, promptly and brutally showed symptoms followed by a rapid progression. The two of them, along with a few more families around the world, have “poked” the statistic possibility of recessive inheritance.

Her first crisis of conscience she had at the schoolyard (according to other students description, probably a clonic seizure) when she was 12. We made some tests – MR and CT of the brain, the EEG showed some changes regarding which the neurologist recommended not to take any therapy unless another seizure should appear. For almost two years nothing negative happened and we were convinced maybe it was only a temporarily puberty crisis. Unfortunately, another seizure appeared, so we reached for additional consultations at one of the largest pediatric institution in Belgrade. It was then Lamictal was introduced as a therapy. Dramatic events followed – one day, during the eighth grade, Milana came back from school, throwing her bag and throwing herself on bed heavily crying. Asked what happened, she answersed: “Mum, I forgot how to write.” Her characteristic as a child was her great persistence in everything she was doing. These days at home she wrote a lot and visited school normally, telling us how her hand would occasionally shake while writing. A drama followed during dancing lessons she liked so much – a few weeks in line, just before the end of every dancing lesson in the evening she had clonic seizures. We tried to convince her to leave dancing lessons, but she was determined: “That’s out of the question, I will not let these clonic disturb my life. ” She persisted, went all the way, past her exam and WON THE CRUEL LAFORA DISEASE FOR THE FIRST TIME and we didn’t know it at that time. We would like to use the opportunity to express our gratitude to her teacher Dijana from the dancing school “Bolero”, a young girl who has supported Milana to persist. Deterioration of her condition kept worrying us, so we reached for another consultation, this time with Primarius Sabol from Zagreb. He helped us a lot, excluding Lamictal, which only made the clonic worse, just as he suspected. 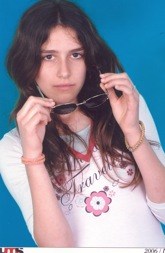 There is a saying doctors should respect: “God, help me to know where my limits are.” Exactly that way our colleague Aleksandra Serdar, a neuropediatrician, acted suggesting us to meet for consultation Professor Jovic from the Neurology Institute for children and youth in Belgrade. It was the end of the school year 2007 when our older daughter Tatjana had her first symptoms. Professor Jovic and his associates set up the diagnosis: MORBUS LAFORA. We were devastated by this news, but didn’t have the right to despair asking ourselves – HOW, WHY… We only could gain what’s left of our strength and start dealing with the cruel disease our girls were suffering of.

Meantime, she successfully finished another school for talents UMS and had a performance at the National Theater of Republic of Srpska; her first UMS mini book was created. Previous years she used to train tennis, liked to ski and enjoyed racing on ski trails against her sister and friends. She also, with success, used to visit school of English language at the Cambridge center and was a member of many school sections at her primary school. She always used to be a creative child so she, her best friend Dado and others, recorded “serials” and made performances at the schoolyard during summer holidays. She liked to read and write diaries a lot, just like her older sister.

Her class master once, at the very beginning of the school year, commented how she could already evaluate her with mark 5 (highest mark) for the end of the school year. Her math teacher has perhaps first noticed there’s something going on with Milana. He noticed her having strange oscillations, sometimes being first in solving hardest math problems and sometimes ”blocking” when dealing with the simplest ones. In all this she was definitely stopped in the second half of the ninth grade. In all that followed (slowness of thinking, more difficult monitoring of teaching, more difficulties with writing…) she was immensely supported primarily by her class master Branislava Tabakovic, her friends and the director and the entire collective of her primary school “Aleksa Santic”. A big THANKS to everyone having understanding for something, which none of us by that time fully understood. Milana, unfortunately, could not attend secondary school and we are still telling her the school is getting renovated… What she is now left with is reading books to her older sister and she is doing it with great love, although slowly, but with enormous persistence, for hours. Now she is having more difficulties to walk, even with assistance, she needs help to dress and feed, but most of all she needs attention, a lot of love and companionship. A mother of a child who is suffering from Lafora disease commented: “ALL THEIR FUNCTIONS FAIL SLOWLY, BUT THEIR NEEDS FOR ATTENTION AND LOVE INCREASE EXPONENTIALLY.” 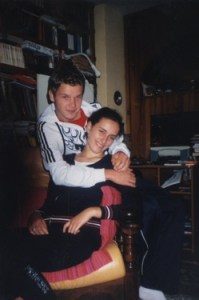 Now she has large fluctuations in her behavior. You never know when it’s more difficult, is it when she’s intellectual worse, satisfied with little things, smiling, or is it when she’s quite well, but at the same time fully aware of the situation she found herself in, but does not reconcile with it. Recently she commented weeping: “Mom, I can not stand this any more” … But … she has always had the unconditional passion for school and all that allows you to learn more … dreamed to become a model … she has always been, without much effort, an excellent student and now she has slowly but surely handled lessons on how to fight with what has come upon her. In the end, isn’t one of the definitions of intelligence – ability to orientate in unfamiliar circumstances? WE ARE CONVINCED THAT LAFORA, AS MUCH AS BLASTING IT MAY BE, IS UNABLE TO BREAK DOWN ALL OF THIS CHILD’S POTENTIALS AND WE BELIEVE THAT MILANA, WITH HELP OF ALL OF US, IS GOING TO BEAT LAFORA …

“We are the Gajic family from Banja Luka in Bosnia and Hercegovina. Our two girls, Tatjana and Milana are suffering from the Lafora disease.”

Read more about the family on their website: Let Us Beat Lafora